I say this because other than Banking and Gov documents I go by John. half the time I need to remind myself after writing John that my legal name is Johnathan.  if you listen to any of the posted phone calls with esp Marlene.. no matter how many times I ask to demand she respects at least my desire on what to be called.. 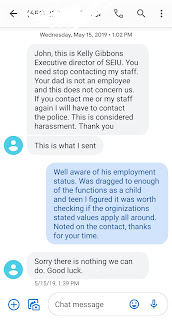 I've discussed this message in previous posts.. but it's once again relevant and a decent pertrail of the issue with hear say based one sided court decisions

also if you are unaware of the structure of the seiu and or take her at her word... she is the ED of  SEIU so contacting anyone in the international org would be an issue no?

she's the Ed of local 284 and I'm a bit surprised she used that miss appropriation or not through through title with me. though I don't remember her very vividly either.  that said I can recall the last discussion I had with the current vp of that local and where we were. if was the international convention in peurterico.  at one time i could have listed most of its executive board from memory (still could but it wouldn't be current)

but rather than put the onus on one side while not living up to the request but threatening legal action...

I haven't tried to comunicate with anyone there or above the local / seiu at all since that message. it really shouldn't be on me to contact them to stop the flip side.

I've discussed elsewhere why I tried to contact them at all. the  short version is I was looking for someone my dad trusted to ask him to step back a s think through the potential damage he's doing twice.  meanwhile and a year before I was geting contacted by people saying Paul had saught them out to tell them I was sick in the head. sometimes by people Paul had no business talking to aka former clients, potential business partners and friends. sometimes people whom as far as I know he had no way of knowing or only met through me.

Which I mention because my take on the poorly implemented ofps suggests that's one of the behaviors ofps are meant to penalize or stop. it's a sabotage and isolation tactic.

I should have gone with their former ED. my first thought for whom to ask was at the time suffering from pretty advanced Parkinsons and not someone I have direct contact info for. the former ED while my dad was VP has a daughter (possibly step it's been like 10 years) that I hung out with a few times/ I've been to the residence had the home phone and her phone.

thing is I was 3 days hungry when I got the idea to try contact g anyone he knows at all. Clyde had died maybe a month before. I wasn't in the best mind set as I did so and several criminal and fedral laws were being violated to put and keep me there. still are.

I can't say I know the intent of ofps.. only that I interpreted it. that said ethicly speaking I contacted publicly avaliable email addresses which would have been adress but their was an issue with the link and or a typo on their site. id have to look at the bounced back message. when I re sent it I hand typed the general address and Kelly's iirc rather than rely on the mail to link.

the other person I contacted was and AFAIK still is an organizer at that local. I didn't realize I had his seiu provided cell number. he was known to me as one of my dad's friends but also a former client of mine. in 06 he ran for district rep of mn 50b and I built an office computer and his campaign website. I had talked to him around 2014 intending to use him as a reference and iirc he was still using that desktop and happy with it.

even hungry I did put some thought into the ethics of who I contacted.

another oddity if you reread Kelly's message to me...

the second message she sent of three... context as a tool, that doesn't look like it was intended for me. why would you tell someone you just sent a message to that this is what you sent them?

But back to today's message for a min note the area code. It covers a decent sized are in mn but more specificly the county and town paul picked for me to be forced to labir under threat to me clyde and all my property. Then me Clyde's body, bobbies cremated remains (also a held usps parcle) all my still being destroyed property.

March 2020 Paul and or marlene came to st cloud 2 days after the ofps passed and called in a welfare check from the parking lot. Over the next 2 weeks I would see them in parking lot or driving by the building 45min from their house 7 times and once walking out the door I almost immediately received a text from Paul asking if I was going to get lunch.  Then they called in another welfare check . Then april 2020 they stole a fellony amount from my garage

Basicly stalking and terrorization for the year and a half since they changed lock Aug 2018. Fellony level theft, signing my name holding opening my mail signing enclosed docs and at least one check 2ith my name from my mail.

The contact alone isn't as bad as all the sudden its area codes local to the cell paul and marlean stalk and in every way but chains confine me in.

Mean while police filter reports to only allow the falsehood i was a 3p year old who never left home when in 2k6 i graduated high school, payed for 45 days in Europe alone then left for ndsu in Fargo north Dakota. When i moved back in jan 2018 my mom said she was my landlord. 10x10 room for 8 mo and at Market rate 6.3k skilled labor/serviced preformed professionals for a decade and a half were not only rendered but frequently DEMANDED.

There's seemingly no escaping the terror ore one sided sociopathic shit in this state and if it continues to go like this maybe the world.

Changing that be it seiu, yourself or society...golden rule, do onto others

Instead we get threaten others while doing onto them with legal consiquenae for talking while u do.

Also more to the pointless when law is discriminatory in application point :

iirc businesses are not supposed to text without explicit permission. Although in Minnesota it appears the only thing the police are concerned about our specific violations of family and civil law highly dependent on who's making them and potentially Federal funding for enforcing

perhaps the more accurate way to put it is... I couldn't be surprised