dad you are diseased

not just him though an entire court exists that acts on claims the person who petitioned felt threatened over even as little as words allegedly said. it would apear any why is exparte or ill recant to why u made someone claim to feel threatened
and demonstrated ly the courts decisions even made in your absence create scientific ly and logicly backed threats to life
while law enforcement further justifies not being concerned due to the Civil findings and one sided restraining order.
not concerned unless they arrest you. the accuser can continue to hold the accused at the bottom of a well and steal fellony amounts during lotion application 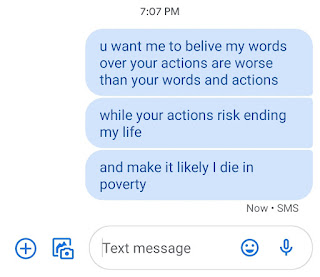