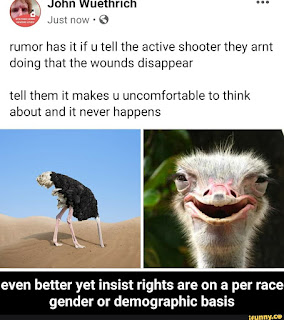 in the name of equality what we actually do is create unlevel competing fractions when there should be a united populous. it's all a play to emotion as well.

we've gone from sticks and stone may break my bones to congress debating the word preference during a mass pandemic after ordering business shut down.

while increasingly playing to parents don't shape their kids because telling them they are responsible might hurt their feelings.

or is it likely allowing boundaries to go up like firewalls while supporting as a Saftey net with increasing freedom to chose is what develops the prefrontal cortex?

pretty sure thats actually known to be the case.

ABC of causality.. I have a feeling if we sat age causes b... with out considering what I said as c