Modern Slavery in the US. Coming Soon to a World Near You 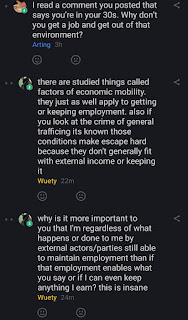 I haven't found words this concise until just now. though this concept has been churning for quite some time.
i think it's highly related to Andy Sterns expressed views on globalization as it pertains to the average 1st world worker.
he called it the race to the bottom.
from what I could see when I looked up sterns quote on that it's attributed to around 2010 but I seem to recall it being exposed as early as 2003 at the seiu international convention in San fransico. regardless of when I think as far as protecting average Joe and Jill... he was and is a smart man.
I also have come to realize when the reality is the gov or a 3rd party can take anything you earned while police stand between you and recovering even once it's pretty grim. reality may be the same party repeatedly commits fellony level theft and police are more concerned over your alleged angrey words during periods of starvation.
this gets  more in line with traditional slavery than wage slavery
who am I to hold this oppinion? the son of a 25 year vp of one of 3 mn seiu locals. said father also claims to own me and have bought me.
in 2018 6.3k of labor I've preformed in the past for pay was preformed for him and my mother and for it police enabled them to keep roughly 43k of my personal property.
negative pay while they continue to poision me
the issue as I see it is most people damaged to this extent won't answer that question. I'd guess some see the flaw while they ask it anyway, others don't want to reprocess the what it's for their own Saftey. there probably exists a group or groups that know exactly that it's a tactic and employ it with esoteric reason.
it's most psychotic in the us. most of the cities are set in a way that with out a car good luck. or you might make enough to eat but economic mobility is next to Impossible with out saving
if nothing bought has any resale value and law may be violated to take from your bank and or take things already worked for there's no real truth in saying working gets you anywhere above that substance existance till early death. 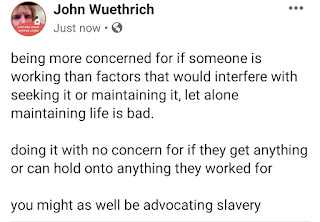 here is a more susinct way to say it.
don't get me wrong I'm not placing myself above anyone trying to call attention to this. some people can sometimes do or see things you don't want to can't or haven't put the time into understanding.
I'd also likely take it down and not speak about it publicly if the injustice done to me would be rectified where it can be. to the extent my work equaled at least having what I worked for.
funny when you have to try to explain this to the retired 25 year vp of seiu local 284 who now claims to have bought and to own you
though I find it far more likely I could be shot by or Infront of police and not change a thing or cause an up roar let alone charge
after all the current reality in MN is 50 percent of police who do something to merit being terminated end up rehired
https://www.google.com/amp/s/www.twincities.com/2019/06/23/how-often-do-arbitrators-reinstate-fired-cops-just-under-half-the-time/amp/
Even submitting a claim of misconduct can end up equaling a criminal charge against the complainer.
guess who does the investigation and submits the desire for charges.. yeah the entity that generated the complaint.
conflict of what?
I have no delusions anyone would protest to riot over my death or murder
the thing is, all this happened while I sat silent. I think it's known or was known abuses often tell their victims not to speak about it and that harm comes for or from doing so.
my parents have said I harm myself by talking about what they do. the reality is somewhat Inbetween. human nature is or has been to victim blame. when psychology makes not attempt or requirement to evidence or objective criteria in diagnosis  and jumps to labels that further the harm there's further potential to surpress even sharing ideas like it might be next to slavery to work for things that arnt yours or can be taken, to work only to starve
in my personal case this started and got worse while I was on silence. there for I can conclude silence will not end it and its life threatening regardless so the incremental marginal harm possible by speaking about it probably isn't of concern
dead is dead and sometimes dead faster reduces suffering no?
at December 15, 2020