it's likely the majority of American schools that do this. at least when I was in school it was and precovid it would still make rhe news every once in a while when somone challange it.

the this is stand or in general repeat

with liberty and justice for all.

the words are "the flag" but by civil standards a rational adult would likely confuse that with the nation. actually claiming the flag isn't a symbol of the nation is a bit like this: 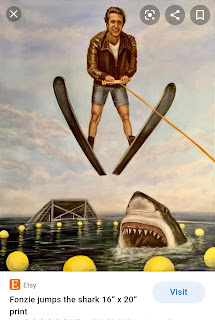 logicly speaking...
also relevant
for those not versed on American culture the fonze jumps the shark moment was when the sitcom happy days lost its precived believability and its viewership.

during the mandatory attendance/compolsery edu from age 6 to 16 its likely every child and young adult has experienced the expectation they comply with thus dogmatic ritual. some may have had explicit penalties for not doing so.

some might have been obligated to do so before the social studies lesson on how North Korea brain washes Ira population.

worse yet you might find the police won't allow a report let alone investigate criminal actions.

I think it's hard to argue that even an income is sufficient to feel protected if laws about another adult accessing and draining it have no obligation for police to take a report on let alone act on or investigate.

then you may also find out paranoia is reason to detain and drug you or failure to keep yourself fed and clothes may be grounds to put you in a mental ward. once again consider how you gaurentee that of someone can steal anything from you any moment.

how do you even maintain a record it may have happened when it's optional for the police to take a report?

the police sometimes say the only reaoson a report would be denied is officer didn't belive a crime occurred. so aparently investigation is meaningless and initial assumptions don't even merit recording it might have happened.

isn't it known that often serial killers in the past have had reports in multiple jurisdictions? but aparently in the modern state of uncivil government records that may help you arnt required

Yet I would say the majority of Americans alive today were required often if not at least once to stand and declare the gov protects them.

the fact its somewhat mandatory, the majority of one's time is consumed for a decade by a not optional attendance and this isn't communicated violates one of the two best lines of reason humanity has ever devised.

the other one IMHO and not violated here persay is the scientific method. that said if applied it would be counter to that system. ie the theory this is good has cases that don't validate the equation or are invalid by it but observed to exist. sci method says throw that out and or revise it. dogma simply says that's ROUGH.

sarcastic news ticker: tune in next week for breastfeedings relation to iq points.