A big thing police across the US seem to lack is accountability for their words and or actions.
Athority with out accountability produces bullies with out check
When they can take a life without trial and usually face no trial for doing so we have a problem 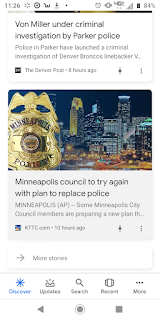 If you're familiar with accounting GAAP is more in tune with what we know about human nature then any control on those supposed to be part of the justice system. One of the tenants has external audits.
The reason for that is probably complex but boils down to avoiding conflict of interest in looking for issues
So long as Minnesota has it set so police handle their own investigations of misconduct and especially if they can bring misdemeanor charges for attempting to report misconduct we won't see Justice.
I'm of the opinion State bar association is also compromised.
Police in Maple Grove are using emergency medical holds executed illegally to circumvent probable cause search and seisure and any limit on detainment
When I called the bar association hotline an advisor told me nope that's just so the police can check you out nothing you can do about it
so in other words there's no recourse for hearsay equalling a 3 to 5 day detainment in Minnesota
How many people have lost pets jobs places of living because of this?
How many people have lost their lives? And the United States 100,000 to 250000 people per year lose their lives due to errors on medical records and by doctors
Emergency medical holds the way mine was executed a doctor signed off on it pretty much as I walked through the door with the stated reason of paranoid. Well I'm no rocket scientist but I'm learning that you can be held after abduction by police for 3 to 5 days in the land of the free I would say anybody should be paranoid
especially when you realize medical records you have no ability to remove are created and the doctors creating them have no obligation to review any evidence.
at January 15, 2021