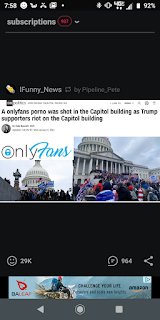 If it's true it's also an example of why control freaking fails
I'm guessing regardless of party most elected officials wouldn't want to see a porno shot in the Capitol building. Well at least not one actually shot there maybe they're into whatever nevermind
But if this is real somebody figured out human psychology here because I'm guessing that was well if this is going to happen the last thing that is going to be on their priority list to stop...
F****** a let's do it
Some say that part way through the first thrust as penetration commenced
And the riot ensued
was the moment Washington was least a circus in a zoo in the last hundred years
It's also said the Washington monument got 50 ft taller